THE DAY MY FATHER DIED
By Cleveland McLeish

We all have bad days during our lifetime, and when you think about it a bad day is unavoidable. There is this saying circulating globally that the surest thing in life is death. We will all face this seemingly divine appointment at some point in our lives. The truth is, we live to die. No amount of mental ascent or acquired knowledge can ever seem to prepare us for that day we sit in a room with the spirit of death, but we must prepare for it somehow, for as sure as there is life… a bad day is forthcoming.

If you ask someone to describe one of the worse days of their lives, you will get several responses ranging from being served divorce papers, to the sudden death of a loved one. You would think that after billions of humanity’s population crossing over from life to death, that we would get used to the thought that this is a normal part of life. Some of you may already be very uncomfortable reading this article so far, and I understand quite well. I was like that once.

For a greater part of my life I avoided funerals. I believed in my heart that the last mental picture I have of someone should not be in a coffin. Of course, if I did go to funerals, I would not even venture near to where the coffin was. I can still count on two hands the amount of funerals I have been to in my entire thirty-nine years (so far) of existence here on earth, but nothing… absolutely nothing could prepare me for the day my father died.

He was diagnosed with prostate cancer several years before he died and so was many who worked at the company he retired from. Strangely enough, my father outlived a majority of them, especially those who actually did surgery. My father never wanted to be operated on, and opted out of that option not from faith, but out of sheer fear. My father was afraid of his own shadow. If there was a thunderstorm, he would literally go under the bed until the lightning stopped. This was very hilarious for me and my other siblings. We would walk about the house, as God did in the garden after Adam sinned, asking, “Where art thou?” knowing fully well where our father was.

Dad spent most of his life on medication. Up to his death, he was taking about six different medications for something, including his prostate. He was given three years to live, but continued for eight years. Here is a faith lesson for us all. Dad never believed that he would live beyond eighty, and for years he uttered it from his mouth.

“The days of our years are threescore years and ten; and if by reason of strength they be fourscore years, yet is their strength labour and sorrow; for it is soon cut off, and we fly away.” (Psalm 90:10)

He died at exactly eighty years of age, just one month short of his 81st birthday, proving again that the Word of God is accurate when it says, “Death and life are in the power of the tongue: and they that love it shall eat the fruit thereof.” (Proverbs 18:21) My father did eat the fruit of his words.

I got married two months before my father died. Those months were sheer torment as we expected him to go at any minute. He did not make it to my wedding because he was sick—not only physically—but he was also getting senile. His mind was in shambles, and he did not even recognize his own home that he built with his own sweat and sacrifice. He tormented us those last few years of his life, and you would think that his death would be a blessing to everyone. It wasn’t.

I got the call mid-afternoon, the first Monday in September 2012, that he was not responding. I waited until my wife could leave work, and then we took the 1 hour commute to my childhood home. My father was lying in bed breathing from his mouth, and not responding to our voice. It is not a good feeling to sit in a room and watch death walk in and take someone from your life leaving a body behind. There is nothing that truly prepares us for that, but I had God and I knew His Word and I knew that this life is not all there is, but that knowledge and assurance did not make the burden any lighter. The moment my father’s breathing finally slowed to a crescendo, I knew that was it. I wanted to run out of the room, but my wife having gone through the death of her grandmother in a similar fashion just years ago affirmed that I needed to be there. It was only by the grace of God that I could stay in that room, and embrace my father after his spirit had departed from this world. In that moment all my preconceived ideas about death vanished and gave way to a new truth I never knew before that moment. I learnt some valuable lessons that I can now pass on to you.

We Need the Support of Each Other
During moments of grief of other family and friends in the past, I was not there for them. Though I made decisions not to go to a particular funeral for my own benefit, it was not fair to those who were grieving. It really mattered that there are people around during that time to hold your hand, wipe your tears and share your grief. We need to be there for each other. What I gleaned from this is that we should give support to those who grieve, despite our own emotions and reservations.

Never Let Go of Your Faith
Jesus said these very words while He walked this earth, “…and, lo, I am with you always, even unto the end of the world. Amen.” (Matthew 28:20) which was echoed long before in Deuteronomy 31:6, “Be strong and of a good courage, fear not, nor be afraid of them: for the Lord thy God, he it is that doth go with thee; he will not fail thee, nor forsake thee.” When you are surrounded by death, the natural response is usually fear. Fear always accommodates death, and leaves a trail of torment behind. It is very difficult in times like these to hold onto your faith that God is with you, but it is in these exact times that God’s word and promises ring true.

When life’s tempestuous waves come against your boat (life) and threatens to shipwreck you, and leave you for dead, faith will cause you to walk on top of the water, and speak to the raging storm commanding it to be still. Faith will get you through anything, so if you have not yet walked through an extremely difficult day, you remember that when it comes, and it will, faith will walk you through it.

It was King David was said, “Yea, though I walk through the valley of the shadow of death, I will fear no evil: for thou art with me; thy rod and thy staff they comfort me.” (Psalm 23:4) God says, “Fear thou not; for I am with thee: be not dismayed; for I am thy God: I will strengthen thee; yea, I will help thee; yea, I will uphold thee with the right hand of my righteousness.” (Isaiah 41:10) 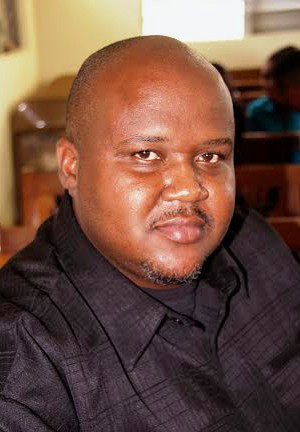 Cleveland McLeish is a full time son of God who writes for the kingdom of God. He makes himself available along with his beautiful wife, to advance the kingdom of God one book, movie script, stage play and soul at a time. Read more about Cleveland here, and at﻿ his website.

FACING OFF WITH A GIANT CALLED FEAR

In 2012, I was sitting at home watching a Halloween episode of NCIS, one of my favorite television shows, when suddenly I had a sensation as if I was unable to breathe. This was a very frightening experience, and I was home alone. [Read more...]

THE DAY MY FATHER DIED

We all have bad days during our lifetime, and when you think about it a bad day is unavoidable. There is this saying circulating globally that the surest thing in life is death. We will all face this seemingly divine appointment at some point in our lives. [﻿﻿Read more...﻿﻿]

THE POWER OF GOD’S LOVE

I heard a story recently of a single woman living alone, who woke up one night to see someone in her bedroom. She was beaten, and left to die. According to her account of the story, she did die. [Read more...]