EXPECT THE UNEXPECTED
By Manuel Ferrer﻿﻿

In a prayer meeting, the pastor sauntered over to the parishioner seemingly locked deep in communion with God. The shepherd gently asked the sheep, “What is your petition?”

Surprised, the member sheepishly answered, “Nothing much.”

The mentor ever so sweet reminded the mentee, “And you know that God promised ‘﻿exceedingly abundantly more than asked or imagined﻿’?”

The pastor solemnly countered, “Then what is exceedingly abundant about nothing?”

Hope is biblically defined as sure, joyous, confident expectation. Hope is also testified as ‘﻿cannot disappoint﻿.’ It is described in tandem with love as fadeless under crushing circumstances and steadfast during difficult days. What is hoped for is bridged by faith from confession to manifestation. Until concrete influx appears, hope remains. Hope works well with the unseen. There is no hope in the already perceived reality. Hope gets satisfied when what is anticipated arrives on the scene giving way to another to be hoped for.

What is expected? Certainly, assumptions are made and rated as most apt; surely, the most improbable is the least likely. Why then expect the impossible? It is illogical, impractical, and unfeasible. It is false hope according to most. But is it really? How does one hope for what is attainable, achievable and possible? Is there really need for hope for the doable, probable and plausible?

‘There is no more hope’ is exactly where hope thrives. The hopeless is where hope fills in. The apparent has no need for hope. It is possible; why still hope? It is highly unlikely; hope barges in hero-like!

Well, pundits argue—hope is fall back for Murphy’s Law. It is crossed fingers until bruised and held breath until bluish. This kind of hope kills. It amounts to nothing.

“Que Sera, Sera” is another variant of misdefined hope. “Whatever happens, happens” speaks of fate not faith, the partner of hope. ‘It’s all up to God’ is the religious counterpart. This doctrine of sovereignty excludes faith and hope; and love, likewise. Final destination is not trying to escape reality only to end up there eventually (in one way or another).

Destiny is discovering what God has already set for eternity, unchanged and unmoved even by the passing of time. Past, present and future merge together in God’s ‘Today’ for eternity. Forever is now.

The bard sang, “Hope springs eternal...” Exactly! Hope is for eternity.
Faith is. Love is. God is. Man is.
Heaven and earth is not designed for eternity.
There will be a new heaven and new earth. Hell is not for eternity.

There will be the lake of fire.

Hope longs for the dissolution of the separation. God and man come together through the Man Christ Jesus. Jews and Gentiles live together in the Body of Christ. Male and female are one together in the new creation. Expectation obliterates the division. The walls tumble down as anticipated. Subjection of all seen creation is not to desperation but to anticipation. Today is not the best day ever; otherwise, it becomes downhill thereafter. Tomorrow offers better prospects. Life is not the best lived now. The afterlife proffers superior possibilities. If all we get out of Christ is a little inspiration for a few short years, we’re a pretty sorry lot. Motivational speeches fail miserably to preach Good News.

Half full, half empty glass of water disappointingly falls short as illustration. It does not fit the bill of confidence. Hope is parting waters above from waters below and land mass from sea course; it is creating life capable of producing like life.

Desperation is not mere absence of hope. It delves deeper. Despair is utterly abject misery. It is not a dead end; it is spiraling down the abyss of hopelessness. It never hits rock bottom. There is none. There is but the sinking feeling of sinking more. It is wishing for an end that never comes. It is pining for death that remains elusive. It is death row and daily postponement of the sentence. The sumptuous last meal has turned tasteless. Let death come! It does not; probably, tomorrow. It is not yet. When will this end? Never! For cessation of earthly life is no viable option; it is but continuing the never-ending doom in gloom.

Hope is ascending. There are no bounds for hopefulness. Hope’s panorama projects vast scenery of lush greens in everlasting undying growth. The universe expands endlessly; hope extends expansively. Hope knows no end. The appearance of what is hoped for only fuels a taste for more to be foreseen.

When and where is the clash of the downward spiral and the upward ascent? What makes hope prevail over despair? Two millennia ago, the incarnation ushered the era of hope. ‘A thrill of hope’ aptly describes the season of the birth of the divine in human form. Indeed, it was a holy night in ﻿Bethlehem﻿. Holy is as not the absence of sin (since God was holy before sin sprang from someone) but being whole, complete, pure, and incorruptible. For how can one tempt to sin one who needs nothing already having everything? For in Him the whole fullness of Deity (the Godhead) continues to dwell in bodily form [giving complete expression of the divine nature]. And you are in Him, made full and having come to fullness of life [in Christ you too are filled with the Godhead—Father, Son and Holy Spirit—and reach full spiritual stature].

Anyone who belongs to Christ is complete in Him, having everything needed. There is nothing anybody else can offer to make this one turn away from the hope that is the anchor of the restless soul. Mind, will and emotions are tied securely sure and steadfast to this hope and kept from straying away. Hope gets stronger as it reaches farther.

Confidence is built up as the unexpected shows up. Dreams turn up unshifting despite opposition. The certainty cannot slip or break down no matter the pressure pushed against it. The assurance is utterly reliable reaching way past adverse circumstances as an unbreakable shielded link to the promises perceived as present realities (though yet to be seen). Hope is firmly fixed.

Years ago when I was invited to speak to a ministers’ conference in an island, the host minister met me at the docks in his automobile. He asked about my travels and I told him about the commute first in a bus then the ferry. He gallantly offered then that at the conference all the ministers would pray that I receive a car of my own. At the conference I told them to their amusement, “When you pray, don’t just pray for a vehicle include a driver and finances for maintenance and gasoline.” Today, I have all three plus other vehicles and drivers to call upon when needed.

This year at another conference where I reported of many speaking engagements that I have to cancel because of conflicts in schedule, the ministers again asked for what to pray for. This time I asked to receive a helicopter, a helipad, a pilot and finances for aviation fuel. 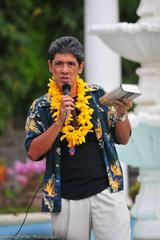